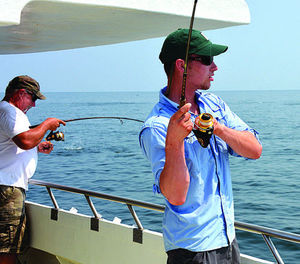 RARE IS THE fishing trip when a boatful of fully grown, experienced fishermen cry “Uncle” because they’re too worn out to fish anymore.

Yet, that was the case last week on the Lower Potomac River when a group of outdoors writers and friends raised the white flag to Capt. Chuck O’Bier, saying it’d be fine with them if he wanted to point the Sea Fox toward home port in Lewisetta.

We left them biting, as some say; although “biting” may be too dainty a term.

During the hours-long, ferocious bluefish blitz in which we found ourselves, the blues were in a near constant frenzy, annihilating huge schools of baitfish. Seagulls and pelicans scarfed up any stragglers the razor-toothed predator fish only wounded.

September is prime time to bust breaking blues. You simply find big flocks of birds frantically working the water’s surface and look for the telltale splashes of bluefish slashing into tight balls of glass minnows, silversides and other forage species. The water near some bait balls actually appeared to have a reddish hue from the minnows’ blood.

The experience was similar to a trip last year, although this year’s expedition had more “Wow” factor. The first group of bluefish we found was small, so O’Bier picked out another flock of birds downriver and edged closer.

We pitched topwater chug plugs, silver spoons, and more into the boiling fray. Hookups came on almost every cast with “taylor” blues in the 1.5–3-pound range. It wasn’t unusual to have five fish on simultaneously.

Tee Clarkson, outdoors writer for the Richmond Times–Dispatch, had asked if he should bring a fly rod. It turned out to be a good bet as Clarkson and Matthew Reilly, a college student and outdoors writer, swapped the fly rod back and forth all day, catching feisty blues on a popper lure and a white/silver Clouser minnow.

Bluefish aren’t delicate when they bite and Clarkson’s 8-weight rod had some serious bend in it as he worked blues to the boat. He had a 9-foot leader with a 40-pound bite tippet on his floating line.

The rest of us stuck with spinning gear, mainly Penn Battle II combos, a nice saltwater package ideally-sized to handle bluefish up to a few pounds.

Once hooked, bluefish never come along easily. They fight all the way to the boat and in the boat.

Some of our lures sported two treble hooks. Avoiding barbed hooks and sharp teeth is a dangerous proposition as you attempt to grasp the fish. Experienced fishermen learn to be careful, but bad things still happen.

O’Bier was helping one angler remove a fish when one slip and powerful flip led to a hook buried deep in his forearm. Bob Ackerman used a multi-tool to cut the rest of the hook away at the shank. O’Bier gutted it out and pushed the barbed end back through his skin. Ouch! After applying antiseptic wipes and a bandage, he was back in business in minutes.

We left the dock at 7 a.m. and had a boat limit of 10 fish per person shortly after 9. The bluefish seemed to scatter by mid-morning sun and we were about to call it a successful morning.

Heading in, though, O’Bier spotted a huge flock of birds near the Maryland side of the mouth of the Potomac. Who could resist? We caught and released fish for nearly two hours. Although we were catching too many to count, a conservative estimate would be we caught more than 300 fish. It was one of those trips for the record books.

While bluefish are a blast to catch, many anglers dismiss their value as table fare. That’s a mistake.

They do not “freeze well,” meaning they’re best eaten fresh or within a week or two of catching. After our all-star bluefish catching day, we sat down to some all-star dining, with fresh, fried bluefish nuggets leading things off.

Darlene O’Bier simply breaded bluefish nuggets with House Autry seasoning and pan-fried them. She set out a basic cocktail sauce and a unique dip of sour cream, parmesan cheese and mayonnaise.

A traditional blue crab feast, complete with seasoned corn and coleslaw followed. It was the perfect capper to an amazing day on the Lower Potomac.