The sun hung low in a Tidewater haze, spilling persimmon and violet bands of light into the Chesapeake Bay. No one spoke, held tightly by the grasp of a stiff September morning chill.

Bob Ackerman’s voice broke the ice. An enterprising welder by trade, Bob spends his weekdays carving a blue collar existence from King George County and the greater Northern Neck region. By passion and weekend, he is a seasoned angler and successful tournament fisherman intimately familiar with the Bay. Booming over the dull drone of idling outboards and the irregular static of spray, his sea-salted voice betrayed his character.

“Still little guys,” he said, putting into words the as-yet-unsatisfied industry of the speechless Captain.

Ken Perrotte, a fisherman from the same county who knows Bob and the Captain well, nodded in agreement. Tee Clarkson, a fellow fly rodder, and I stood silently on the deck clasped to the rails in observation.

In the cabin, Captain Chuck O’Bier had his eyes glued on the horizon as he subconsciously corrected the wandering wheel of the 46-foot Sea Fox, moving in some general direction across a frothing surface, featureless to the untrained eye. Every so often his eyes would enlist the aid of a pair of binoculars kept handily by the wheel and shift skyward.

When at last he found what he was looking for, he returned the binoculars to the dash. A dropping thud in the outboards signified a forward intention. The droning and static intensified, and the Sea Fox carried us deeper into the morning.

With the sun off the starboard gunnel, we were pointed north, riding the imaginary line that separates the Potomac River from the Chesapeake Bay—fresh from salt. The sun had risen higher in the sky by the time the gallant squawks of seagulls began to penetrate the monotony of boat noise. It was early still, but there was a war raging in the river mouth.

As the summer wears on, water levels in the river drop. At the tail end of the season, very little freshwater protrudes into the Bay. Saltwater rules. The bluefish come for the saltwater and stay for the bait—the glass minnows, silversides—that live by the billions in the rich estuary. Operating as a cohesive unit, vast schools of the barbarous blues coral and blitz balls of bait—gorging themselves before a waxing winter forces them into a southward retreat. Seagulls in flocks dive from on high, contributing to the carnage. The food chain gathers at the surface.

Isolated battles twinkled across the landscape. But so far, the underwater assailants were undersized, and the blitzes insignificant and small, dissipating after a few moments of the Sea Fox’s presence.

Several hundred miles inland, the inhabitants of the mountain streams of home were fighting their own battle. The Southeast was in the grips of a powerful drought, exacerbating the seasonally low, warm water of late summer. Glassy water crept through the hollows, replacing melodic riffles and runs. The brown trout were forced to abandon regular haunts for the shelter of deeper water as the twilight of an Appalachian autumn tugged at their biological clocks. With the full moon of early October, they were due to become active and agitated—amped up in preparation for the spawn. But the whole system was altered. It was a quieter drama, but drama, nonetheless. A drama of shortage and suffering.

It wasn’t the worst the rivers had faced, though. In their current state, they are shadows of fossils of a virgin Appalachia. Their native form—clear, cold, shady, and pure, fed by the natural succession of hardwood—guarded the brook trout, the region’s hallmark species, a fish painted in vibrant watercolors that mirrored the richness of the ancient mountain ecosystem. In centuries past, infected by a rabid lust for resource acquisition, the region’s pioneers clear-cut the mountains to the banks, warming the streams, flooding them with silt, and restricting brook trout to only the highest of mountain trickles. The brown trout, now treasured, are stranded Europeans whose immigration was facilitated by American scientists to fill the sporting void left by the brook trout. But the fishing, even on the best of days, is a wish for what was.

A clunking thud initiated the swift-sounding lobbing of large metal spoons from the boat. The creaking of gulls was louder than ever. Chuck peered out from the cabin to see Bob and Ken wielding heavy spinning rods, reeling like hellhounds were in the water. And they were. 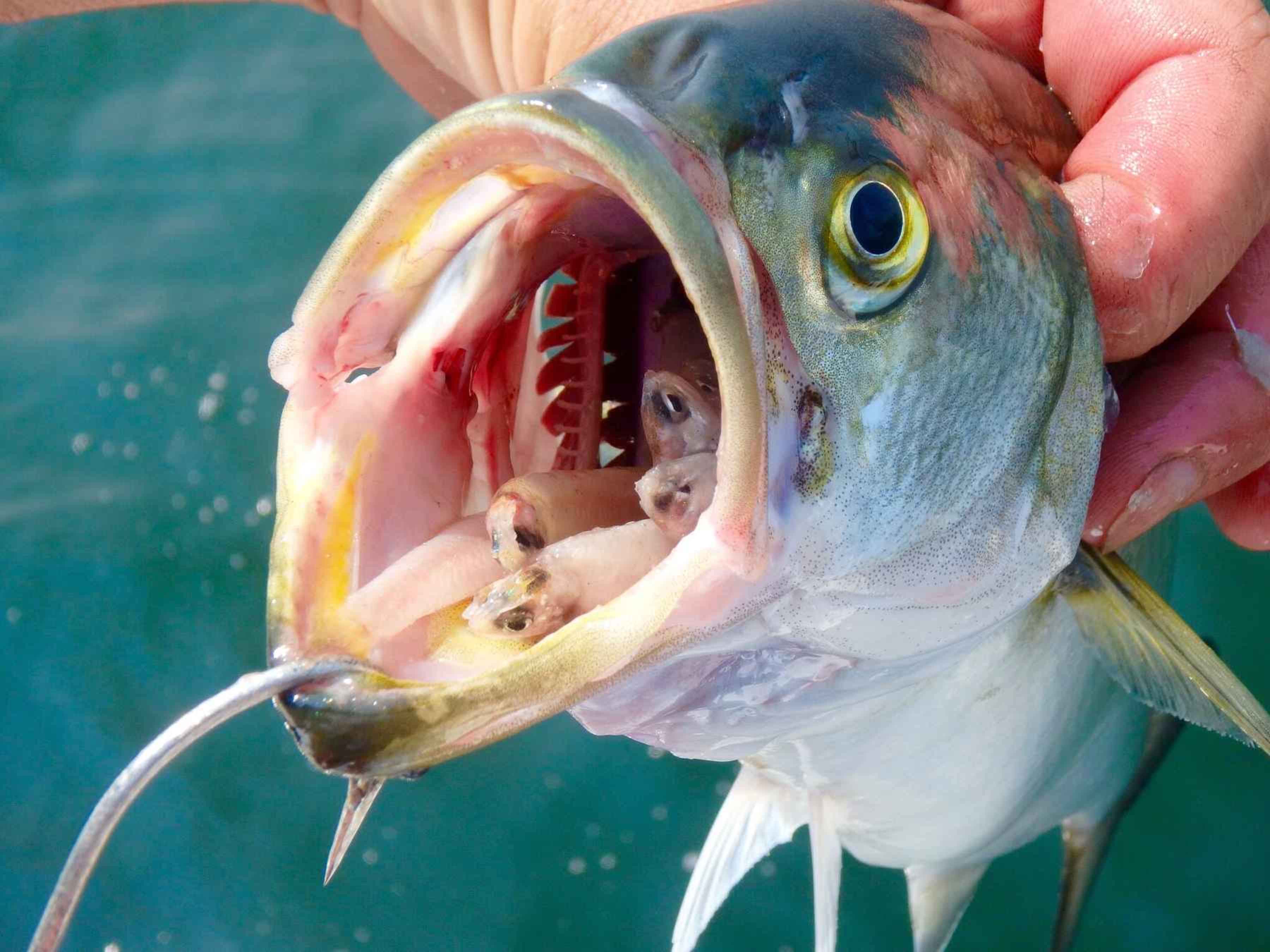 As far as the eye could see, in every direction, the surface was frothing with war. Beneath the surface, the deep blue of the Bay glinted with the sparks of frenzied schooling bluefish, silver like blued metal. Eyes wide, electricity coursed through their bodies, rapidly beating their rigid tails. They crashed the surface, currant red with the blood of bait, their jaws of dagger teeth open, chomping relentlessly as glass minnows pushed through the surface tension in an effort to escape mass murder. Seagulls in battle formation dive-bombed, driving piercing beaks into the turmoil, only to reemerge swallowing, bloody saltwater shedding from their ivory feathers.

Bob and Ken burned their spoons through the school, hooking and losing several fish that T-boned their fleeing lures on hundred-yard retrieves. Every cast brought a chattering bluefish into the boat, pumped with adrenaline, open mouth spewing alive but mortally wounded bait with every headshake. Some wrenched so violently that they sacrificed their own jaws as they were lifted from the water, only to return to the war with unchanged ferocity.

Tee and I doubled hauled from the stern, throwing pencil poppers into the chaos. A quick retrieve caught their attention. A dozen blues made chase, fighting for the chance to assault the crippled minnow, often missing, often punching the fly feet into the air, swirling upon losing it, and then burning after it again when it returned to the water with a splat. Once hooked, the devils sounded, bending our eight weights in half and ripping line from reel. Adrenaline jumped through the fly line and into our own pulses. In minutes, the raucous symphony of strife had faded into the background as the action wore on. 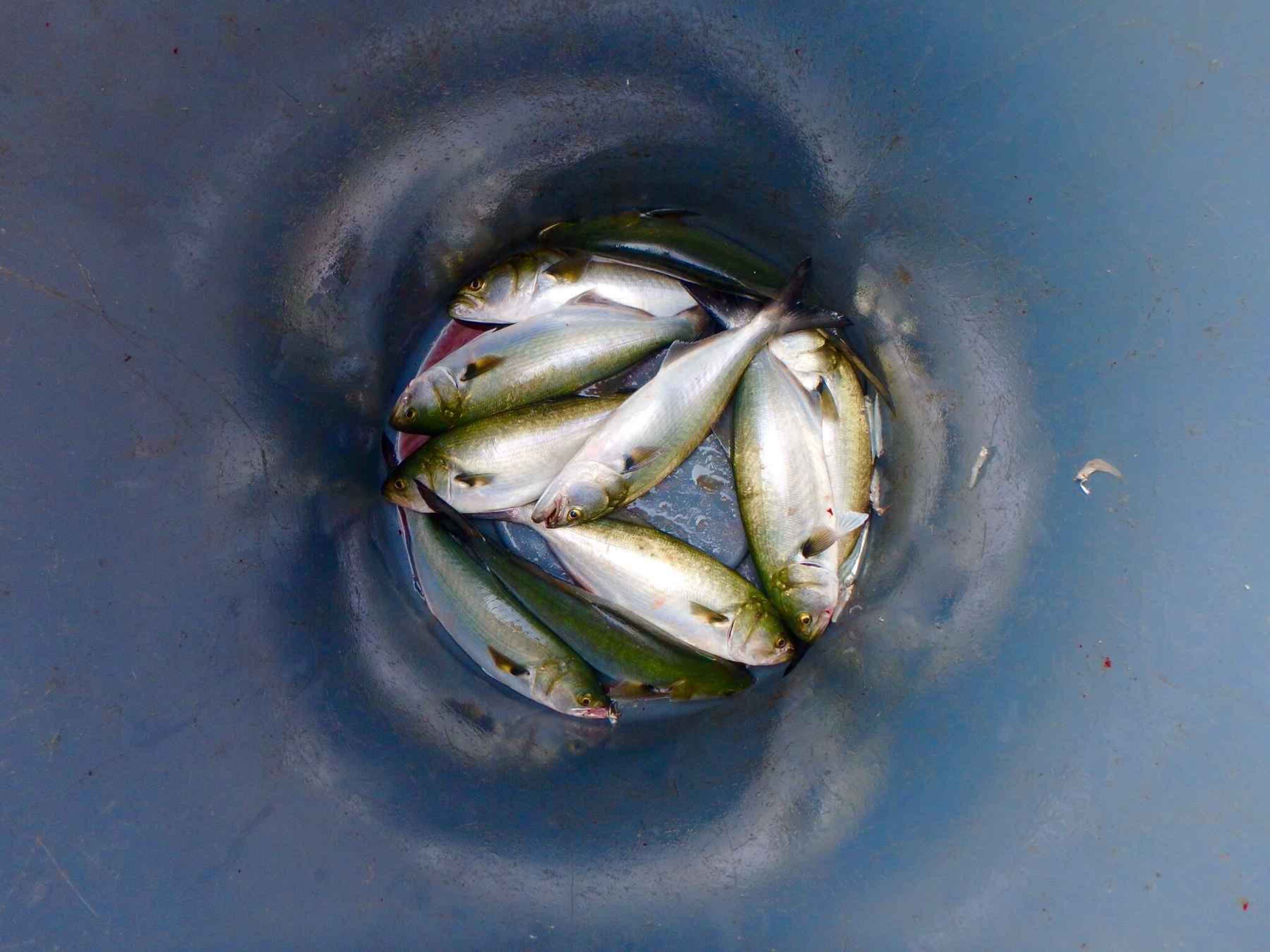 In three hours, we boated almost 400 fish, mostly between three and five pounds. We had filled a Rubbermaid trash can with a four-person limit. Our arms were weak. The battle was still raging, raw and exposed under the harsh light of
the midday sun, but we had had our fill—a bounty for sure—and it was time to return to dock. We stowed our rods and took up reflective conversation.

His job complete, the Captain leaned out of the cabin and spoke some of his first public words of the day, announcing that he had radioed the local watermen for some blue crabs, if they were available, to accompany our fish at lunch.

I sided up to the cabin in time to hear a few reflective remarks from the Captain, stranded from context by the dominant drone of the outboards.

“We used to find ‘em bigger,” he said, shouting over the engine noise. “Eight, ten pounds.”

“Used to have great schools of big striper and reds, too, out off the barrier islands,” he said, waving a loose hand to the east. “But I don’t even go over there, anymore.”

I pointed my gaze to the East, along the rolling horizon, and saw nothing.